So I decided that I’d go ahead and finalize that catlike dragon from last weekend. 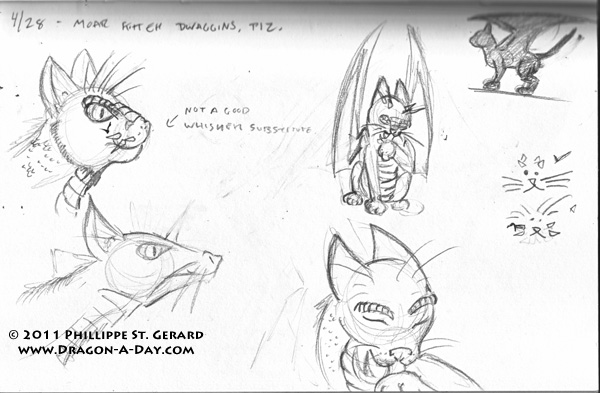 While trying to balance the cat/dragon ratios, I tried (briefly) to substitute feline parts for some draconic-seeming equivalents. The whisker idea didn’t quite work, at least not as far as the muzzle was concerned- take away the muzzle whiskers and the creature’s heritage becomes much fuzzier, while the brow whiskers are not necessary by a long shot, and could probably be replaced with fuzzy caterpillars and no one would really notice.

SInce many of my dragons tend to smooth skin (as far as line quality goes), the furrier parts of the catlike dragon (that needs a name) came out looking a little shaggy, to differentiate themselves from the scaly bits.

Oddly enough, I found the reptilian head with cat ears in the lower left side to be a little ratty, or maybe like a kobold. In any case, this is the final version: 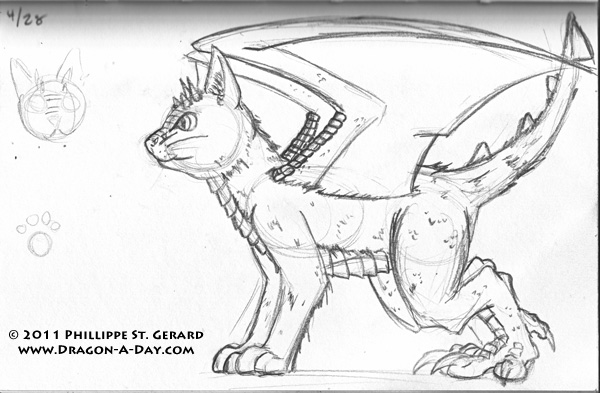 I feel good about this, although now that I’m looking at it while preparing to post it, I see that I forgot to make a fur/scale transition around the hindlegs. Ah well.

And about those hind feet and their wicked, wicked claws: anyone who’s wrestled with a cat or watched two cats wrestling will tell you why the back legs are like that- it will kick the guts out of anything dumb enough to let it get a grip on it. That, and it’s got a little extra oomph for jumping to get airborne.

And a bonus, because I wanted to do this since Monday: 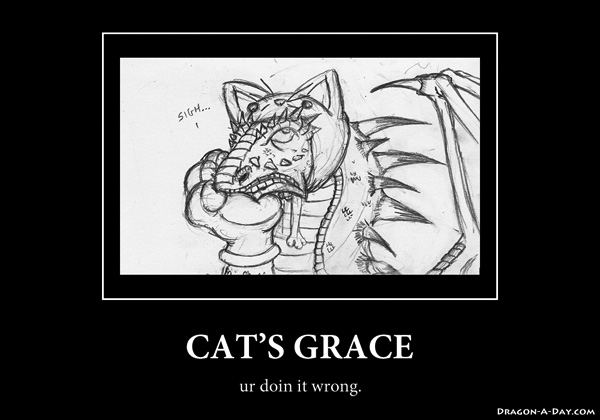 Required reading if you’re not a nerd: cat’s grace.