Up until the advent of the third edition of the world’s most popular roleplaying game, the only half-dragons I’d ever heard of were Goro and that weird oracular snake-woman from The Golden Child (whose name, according to about 4 minutes of Googling, is Kala, and according to my fuzzy memories of the film, had a mother who was “raped by a dragon.”) 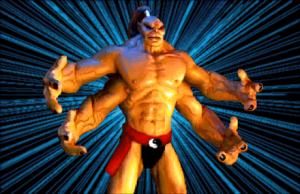 Anyhow, the D&D 3.5 half-dragon template can be applied to any living, corporeal creature, because in D&D, dragons can not only have have sex with, but procreate successfully anything that they damn well please. Also, according to the rules of the game, the resulting offspring gains claws and a bite attack if it didn’t have them before.

Therefore, in the spirit of the season, I present you with some half-dragon turkeys. 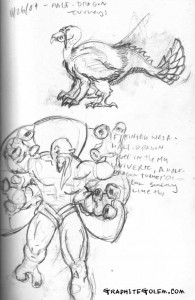 My scrawl reads: “If Kintaro were a half-dragon tiger in the MK universe, then a half-dragon turkey would look something like this.” But, as it turns out, the unloved hexapodal man-tiger is just a stripey member of Goro’s race, which was eventually retconned into some sort of demonic beings.

And that’s all we’ve got for you tonight. See you tomorrow; hope your Thanksgiving was happy.