So I’d be lying if I didn’t tell you that I had this marked on my calendar, but I didn’t know what I wanted to do with it. The Dragon of Revelation comes immediately to mind, but the Number of the Beast does not actually refer to Satan, it refers to the Second Beast that he summons, the Beast out of the Earth.

11 And I beheld another beast coming up out of the earth; and he had two horns like a lamb, and he spake as a dragon.

16 And he causeth all, both small and great, rich and poor, free and bond, to receive a mark in their right hand, or in their foreheads:

17 And that no man might buy or sell, save he that had the mark, or the name of the beast, or the number of his name.

18 Here is wisdom. Let him that hath understanding count the number of the beast: for it is the number of a man; and his number is Six hundred threescore and six.

Really, the Mark and the Number of the Beast are two separate things, but common useage has made them kind of blurry. Nevertheless, since the Second Beast only has the voice of a dragon, the question of whether it is actually of draconic origin has no real answer. Conspiracy theorists, Biblical scholars and others have stretched, reinterpreted, translated and skewed the texts over time to make the Second Beast as multifarious as the First is chimeric, but this doesn’t solve my problem.

However, there is this nifty video about an Albrecht Durer woodcut that I want to show you. It’s especially interesting because the First Beast, which is morphologically similar to The Dragon, has all different heads, and looking at it reminded me quite strongly of what I was trying to accomplish… There really is nothing new under the sun:

Anyhow, it seems that there is no Biblical dragon or draconic creature (chimeric, yes, draconic, not as such), so I am left with no recourse and no good ideas. Someone suggested a few things after learning about my conundrum, including

“A dragon reading the Bible and finding that out? With a Homer Simpson “d’oh!” thrown in for good measure?”

But I ended up going down a similar, but different path: 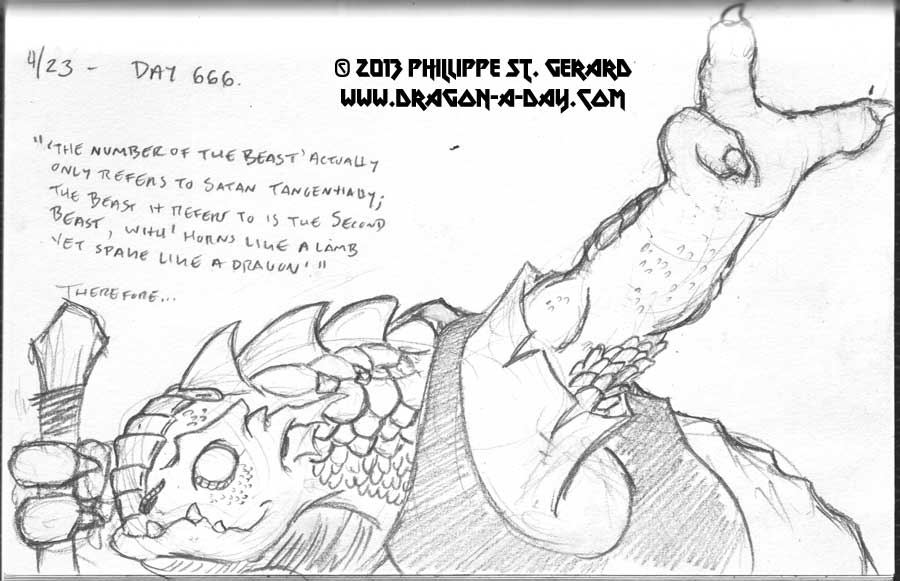 “‘The Number of the Beast’ actually only refers to Satan tangentially; the Beast it refers to is the Second Beast, with ‘horns like a lamb yet spake like a dragon.’ Therefore…”

While I’ve done exactly one (specifically) Metal (as in music) Dragon before, some discussion with my gaming group about a proposed Dark Sun game led to the joke that my upcoming draconic bard (who needs a name, by the way) would be “totally metal,” because as a dragonblooded character, he would pretty much literally be a child of a (if not the) Devil. I don’t know enough about Dark Sun to say if this’d be true, but it was a source of inspiration, and it’s absurdly late.

This entry was posted in Dragon-A-Day, gaming, Online, Sketch and tagged anthro, bard, D&D, Dragon of Revelation, metal, The Bible. Bookmark the permalink.